Thanks for keeping me company.

You have of course already received my story, but here is the short version:

I don’t remember the time, but it was pretty dark.

However, the moon was shining, so I saw someone walk towards me.

Before I knew it, some words were said that transformed me, but I was still able to move, which seemed to surprise the enchanter.

They said something else and since then I have been standing still.

Your result in task 5

If you are standing in front of the main entrance to the cathedral, then you are already in the right place.

Now you can talk to the gentleman on the horse, but please just stay where you are. 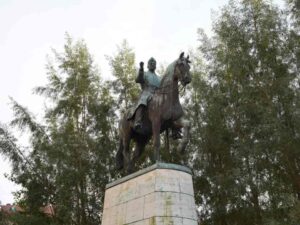 Gamemaster:
Press “Next”, when you are ready for the next task.

Everyone else can then press “Refresh”.

[fastForwared]
Not necessary to solve the mystery.

My name was Hermod and I lived a lonely and unhappy life.

So I suppose this fate is what someone like me deserves.

I was lonely, my biggest wish was to have a wife and a child, which is something I may have expressed in public.

So either as a cruel joke or just the irony of fate, I was turned into half man, half woman and received an abominable baby on the arm.

My evening had begun in the afternoon, because I visited a pub.

I suppose I drank a beer or two.

At some point, the oh so great and amazing Bernhardt Jensen came through the door.

I may have said some snarky remarks, which meant that I quite quickly was thrown out.

So I left, a bit tipsy, and walked by the river on my way home.

I don’t know what time it was, but it was definitely dark.

I was probably not walking completely straight, so when I saw a person come towards me, I figured they wanted to see if I was okay, but no.

Suddenly I heard the person say some words, it was pure nonsense, but then I felt my body begin changing.

However, I was still able to move, which seemed to come as a surprise.

The enchanter said a few more words and then my body stiffened.